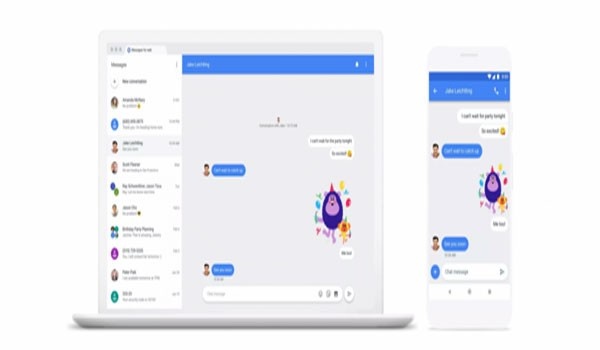 It’s official: Android Messages for Web is coming. Nearly two months ago, an APK Teardown of the Android Messages mobile application revealed that Google was working on a web client for the default SMS app on Google Nexus and Pixel phones. The feature was discovered to support all major desktop web browsers and would require pairing with a mobile device by scanning a QR code. Last week, we discovered further evidence that the feature’s launch would be imminent since the implementation of the pairing process in the Android app seemed to be complete. Now, Google has officially confirmed the existence of the web client in an exclusive feature on The Verge.

As shown in the feature image and the image below, the web client will sport a Material Design interface (much like Gmail’s upcoming redesign) to match the Android app. You can insert emojis or images just like the Android app, though you can’t initiate voice calls from the browser. The message history is synchronized with your phone just like Whatsapp, so as long as the two are paired you can access your full back-and-forth history with your contacts.

The phone shown in the picture above appears to be a Google Pixel. Given the major announcements related to the pausing of Google Allo and the introduction of ‘Chat’ that Google has unveiled today, we doubt that the company plans on limiting the web client feature to just Google devices. We expect the Android Messages web interface to be available on most Android devices. Once the feature goes live, here’s what the setup process will look like, at least initially.

In the menu, there’ll be a “messages for web” button (though the string might change) or toast message that, when tapped, leads the user to a page instructing them to scan a QR code on messages.android.com. Currently, attempting to access that subdomain will return a 404 as it hasn’t gone live yet. Given Google’s announcement of the feature via The Verge, I don’t think we’ll have to wait much longer before it’s accessible for users. Although, it wouldn’t be the first time that Google announced a new feature only for it to pop up months later.