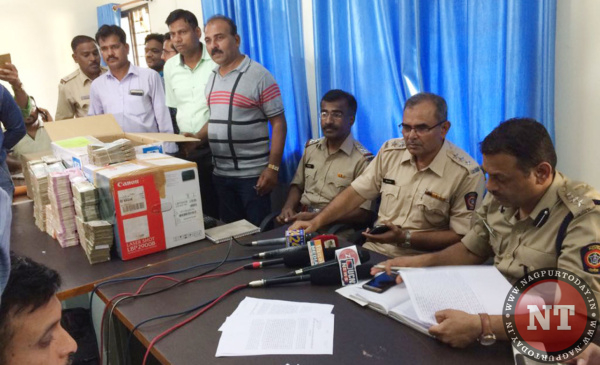 Nagpur: The Zone 4 DCP Nilesh Bharne proved his alacrity and cracked the much talked ‘hawala’ in shortest of time. The DCP is now receiving all accolades from one and all for his smart handing of the case to its logical end. Despite facing embarrassment due to involvement of police department personnel in the dubious episode, the DCP Bharne stood his ground and arrested seven accused including three cops. The stolen money – over Rs 2.50 crore — was also recovered swiftly.

During the investigation of the dubious episode, the DCP Bharne came to know Rs 2.55 crore was missing when Nandanvan cops announced seizure Rs 3.18 crore from a car coming from Raipur and intercepted at Prajapati Square in the wee hours of Sunday, April 2. As the two informers Ravi Machewar and Sachin Padgilwar, who had tipped off Nandanvan cops about huge cash being transported in the car, disappeared from the city after cash seizure. After stealing the cash, the accused Sachin along with other accused went to his hometown Bhisi in Chimur Tehsil of Chandrapur district and handed over the cash to his father who in turn hid the cash in a pit in his farm. After studying Call Detail Records (CDRs) of the accused and API Sonawane, the DCP Bharne found out police-criminal nexus in the case. The accused tried to mislead the investigators for two days by cooking different stories. But a ‘professional’ grilling made them spill the beans. A team of cops immediately went to Sachin’s hometown Bhisi and recovered the cash.

Bharne said, the accused Ravi and Sachin, who had driven the SUV to Nandanvan slums to take out a part of money, were working for the accused API Sonawane as informers since one year. They tipped API Sonawane about a Duster SUV which had been used to transport cash to Nagpur once in a week. An Ertiga car with two other accused had followed the SUV in Nandanvan slums. The cash was loaded in the Ertiga car. After stealing the cash, Sachin and Ravi went at Nandanvan Police Station with the SUV. They handed over the SUV to police and drove away in the Ertiga to Bhisi where they gave the cash to Sachin’s father saying that it belonged to their friend. On Sunday morning, the father took the cash to his agriculture land and hid it in a pit, the DCP said.

Soon, they fled to Aurangabad and stayed for a night. They were on their way to Goa via Pune, Satara and Kolhapur but changed the plan at last moment and went to Mahabaleshwar on Tuesday evening where Satara police nabbed them.

After taking charge of Zone 4, DCP Nilesh Bharne has emerged as terror to the hardcore criminals. The DCP carried out numerable raids on several gambling dens, dhabas, busted sex rackets, targeted cricket bookies. The flamboyant DCP cracked the dacoity and murder at a petrol pump in Nandanvan area within hours of the crime. He has also busted racket involving kidnapping and selling of minor girls. It is learnt, the DCP was camping in Nandanvan Police Station since the past many days and keeping hawk eye on criminal activities. He was eating samosas and kachoris but stuck to his job with determination.