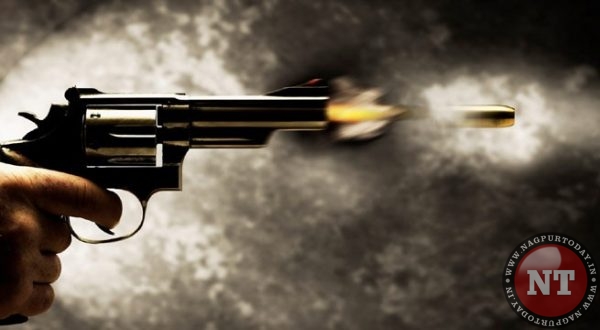 Nagpur: Tension ran high at Lalganj-Raut Square here when a notorious goon fired a bullet on DB Squad of Shantinagar Police Station on Saturday morning. Fortunately, as the goon was under influence of liquor, the bullet missed the target. No cop or civilian was hurt in the firing. The stunned cops later overpowered the criminal and placed him under arrest.

A pistol, five live cartridges and an empty cartridge have been seized from the accused goon who has been identified as Nitesh Chaudhary. Nitesh, it is learnt, is member of dreaded Sumit Thakur gang. The Sumit Thakur gang and Karim Lala gang are allegedly enemies of each other.

The accused, Nitesh Chaudhary, on Saturday morning enjoyed heavy dose of liquor and under the heady influence, started creating ruckus at Lalganj-Raut Square in Shantinagar area. He was wielding a gun and threatening nearby people. The panicky people immediately alerted Shantinagar police upon which the DB Squad of police station, led by Vijay Kadu, rushed to the spot. As the accused goon spotted cops approaching him, he started shouting loudly. Cops warned him to put the gun down and surrender. But instead of heeding to the warning, the accused Nitesh Chaudhary suddenly fired a bullet at the DB Squad. Fortunately, the heady stuff acted as safety trigger and the goon missed the target. No cop or civilian was injured in the firing. Taken by surprise, the DB Squad members immediately overpowered the goon and brought him to police station. After a dressing down, the accused Nitesh Chaudhary was booked under relevant Sections of the IPC and placed under arrest.