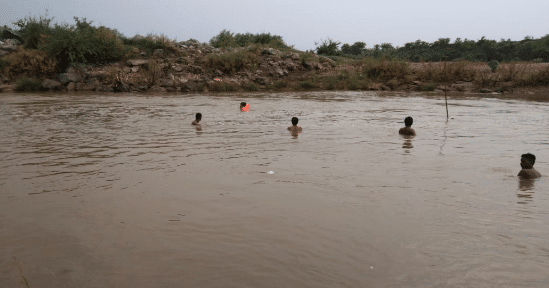 Nagpur: Tragedy descended on the families of four teenage boys from Nagpur city after they met watery grave in the swirling waters of Kanhan river at Waki, off Saoner Road, about 35 kilometer from here on Tuesday.

Taufiq, Praveen, Atesh, Arif along with their friends Teju Pradip Potpuse, Shayan Riyaz Qazi, Palash Jitesh Joshi, Vishal Bhailal Chauhan had gone to Waki for a picnic with- out informing their parents. They went to the DwarkaWater Park. As it was closed, they went near Kanhan river.

Around 1 pm, Taufiq, Praveen, Atesh and Arif stepped into the river for swimming despite warning boards put up near the banks.

Suddenly, they were caught into strong currents. As one of them started drowning others followed while trying to rescue their friends. All the four were washed away.

Their other friends standing on the embankment shouted for help. Local residents gathered. Staff from Khapa Police Station visited the spot on being informed.With the assistance of the local divers, cops launched the search for the bodies. Additional Superintendent of Police (Nagpur Rural) Rahul Maknikar also visited. SDRF team arrived and launched search for the bodies of Taufiq, Praveen and Arif. The search operation was suspended late evening. It would resume on Wednesday morning.