The Pulse Polio Vaccination Drive, aimed at Polio-Free India, will be held on Sunday for the kids between the age of zero and five years. NMC makes elaborate arrangements to ensure each and every child is vaccinated. 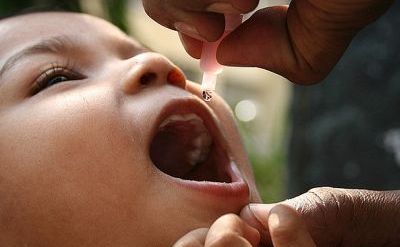 Remember the booming words: “Do Boond Zindagi Ki” (Two Drops of Life) voiced powerfully by the Mega Star and Bollywood’s Shahenshah Amitabh Bachchan for Pulse Polio Drive. And the time has again come for “Do Boond.” The Pulse Polio Vaccination Drive, aimed at Polio-Free India, will be held on Sunday (January 19) and February 23 (Sunday) for the kids between the age of zero and five years.

The Government of India launched the Pulse Polio Drive in order to kill the dreaded disease mercilessly. The Pulse Polio Drive takes the care of vaccinating every child of the specified age. Maharashtra State has not found a single polio patient since 2011. Though the announcement has been made of Polio-Free India, polio patients have been found in the neighbouring countries. Therefore, the possibility of infection reaching into India could not be ruled out.

The Nagpur Municipal Corporation (NMC) is implementing the Pulse Polio Drive in its 10 Zones. The NMC has deployed 10 Zonal Medical Officers, 10 Coordinating Medical Officers and 10 Health Inspectors for the first session (January 19) and second session (February 23) by organizing PPI on the days of the drive and visiting house to house (IPPI). Utmost care will be taken to vaccinate each and every child during the drive.

A total of 3275 employees would be deployed for managing the booths requiring 235 supervisors for PPI on the drive days. Maximum care will be taken for Pulse Polio Vaccination on booth days. The NMC has made arrangements for transit teams to ensure the vaccination of kids at temples, masjids, malls, Big Bazaars, Railway Stations, Bus Stand, Airport, Check Posts, marriage halls, and by mobile teams at most sensitive areas, construction sites, brick kilns, kids of nomadic tribes, street kids, orphanages, slums, small factory areas and other possible places. The transit and mobile teams would work on five days for visiting the assigned places to ensure every kid is vaccinated on booth days and house to house visits by hundreds of teams.

The Pulse Polio Drive will begin at 7 am in all 10 Zones and the Rotarians will reach to every booth with the vaccines.

However, the sources said, the figures of employees the NMC has been showing on papers to be deployed for the Pulse Polio Drive are far away from the truth. There is possibility that the number of trained employees could be less, and most probably, untrained employees would carry out the mission. Not to mention the apprehensions of hassles and haphazard working in this situation, sources said.