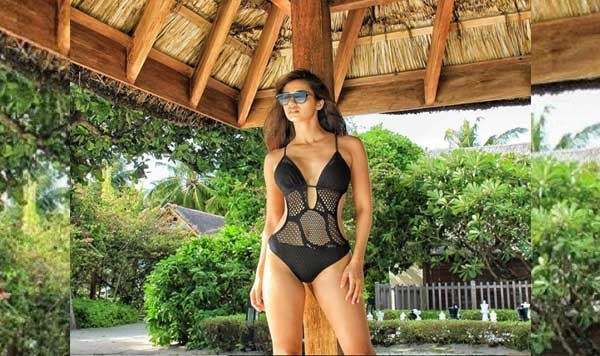 Disha Patani is perhaps one of the hottest actresses in Bollywood today. She is blessed with a perfect curvilicious body and the diva is often seen raising temperatures with her Instagram pics. Well, Disha recently took to the photo sharing app to share a pic of herself in a hot black monokini and the Baaghi 2 actress is surely raising the heat with it.

In the hot and sensuous photo, Disha is seen looking absolutely stunning and can also be seen oozing enough oomph and confidence in the black fishnet swimsuit. She has completed the hot look by leaving her hair open and completing it with a pair of blue sunnies. That Disha is complete beach bum is a known fact. Her instagram profile is filled with pics of herself in hot beachwears either indulging in some or the other water sport or just chilling by the pool side. The photo uploaded by her has already garnered over 7 lakh likes.

Well, the promptness with which she received 7 lakh likes on the pic goes to show her massive fan following. One of her fans commented, “I am in love with you. looking nic in pic.” Disha is rumoured to be dating her Baaghi 2 co-star Tiger Shroff, who also has quite a massive fan following. Despite bad reviews, their last outing together was a huge hit, only because of their popularity. Disha made her Bollywood debut in the year 2016 opposite Sushant Singh Rajput in MS Dhoni: The Untold Story. Since then, it has only been an upward climb for the diva. Her Instagram page has over 11 million followers and she has definitely carved a niche for herself within a short span of time, becoming one of the most popular next gen actors. Next, she will be seen alongside Salman Khan and Priyanka Chopra in Ali Abbas Zafar’s Bharat.