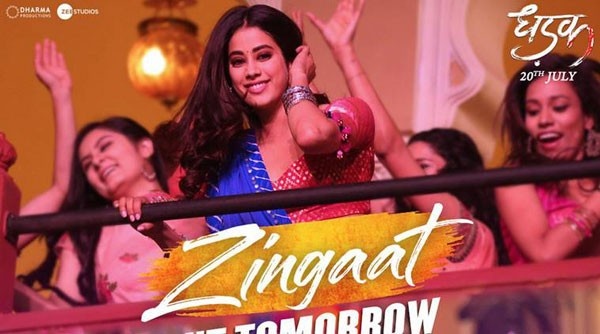 Mumbai: The much-awaited track from Ishaan Khatter and Janhvi Kapoor’s debut film Dhadak is out, and it’s beyond magical. The electrifying song will remind you of the original track in Marathi blockbuster Sairat starring newcomers Rinku Rajguru and Akash Thosar.

The makers of the Hindi version of the film have kept the essence of Zingaat intact and have recreated the same mood, energy and madness in it.

Check out the Hindi version of chartbuster Zingaat here:

Ajay – Atul sang, composed and penned the lyrics of the song in Marathi while the Hindi version has been written by Amitabh Bhattacharya.

Produced by Karan Johar’s Dharma Productions, Zee Studios and Apoorva Mehta the film is jointly presented by the banner and Zee Studios.

For the unversed, Janhvi is the elder daughter of Late actor Sridevi and producer Boney Kapoor. And Ishaan is Shahid Kapoor’s half-brother. He is veteran actor Neelima Azeem and Rajesh Khatter’s son.