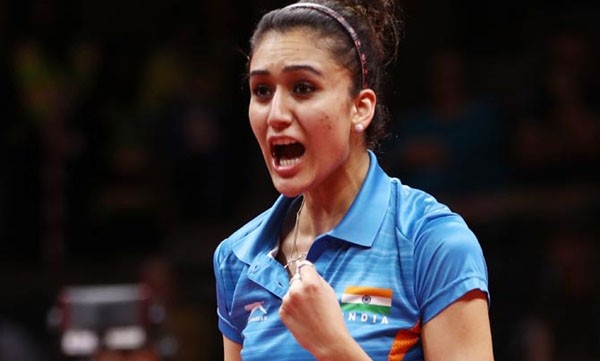 Manika Batra won the women’s singles table tennis gold medal as she outclassed Yu Mengyu of Singapore 4-0 in the title clash, at the 2018 Commonwealth Games in Gold Coast, on Saturday.

This is Batra’s second gold medal at the Games, having earlier triumphed in the Women’s Team event.

India’s Dipika Pallikal and Saurav Ghosal had to settle for silver after losing in the mixed doubles final to Australia’s Donna Urquhart and Cameron Pilley, at the 2018 Commonwealth Games in Gold Coast.

Pallikal and Ghosal suffered a straight games defeat as they went down 8-11, 10-11‌ in the title clash.

Wrestler Vinesh Phogat continued India’s gold rush on Day 10 as she claimed an emphatic victory in the final of the women’s freestyle 50kg wrestling event at the 2018 Commonwealth Games in Gold Coast on Saturday.

Sumit continued India’s impressive showing on the match as he outclassed Sinivie Boltic of Nigeria to clinch the gold medal in the men’s freestyle 125kg Nordic event.

India’s Neeraj Chopra’s fourth attempt of 86.47m is his season’s best and sealed India’s first gold medal in track and field at the Commonwealth Games, in Gold Coast, on Saturday.

The 20-year-old’s first throw attempt was 85.5 metres in the men’s javelin throw final.

It is India’s fourth gold in track and field at the CWG after Milka Singh, Krishna Poonia and Vikas Gowda.

He defeated Brendan Irvine of Northern Ireland in the final. He won it 4-1.

This is India’s 20th gold medal at the Games.

Manish Kaushiks lost to Australian Harry Garside in the men’s 60 kg boxing final, he settled for a silver. It was a split 2-3 decision.

The Five-time World champion and Olympic bronze-medallist, competing in the Games for the first time, proved too good for the 22-year-old and won by a unanimous 5-0 decision.

This is her first Commonwealth Games medal and India 18th gold at the ongoing Games.

The 35-year-old Mary Kom had won the Asian Championships gold five months ago, before taking the top honours at the India Open in January.

She also won a silver medal at the Strandja Memorial Tournament in Bulgaria before arriving in Gold Coast.

He shot 454.5 to create a Commonwealth Games Record. Grzegorz Sych of Canada finishes second on the podium with 448.4 and Dean Bale of England bagged the bronze medal with 441.2 points.

India’s women’s hockey team turned in an embarrassing performance in the bronze medal round against England and was thrashed 6-0.

They conceded four goals in the last five minutes to give the English a tennis scoreline victory.

Hopefully, the men’s team will do better in their bronze medal match against England.

Chirag Chandrashekhar Shetty and Satwik Rankireddy are in the final of the men’s doubles badminton at the Commonwealth Games.

They needed just 42 minutes to demolish the challenge of the Sri Lankans and get in the reckoning for India’s first-ever men’s doubles medal in badminton at the Games.

Saina Nehwal also reached gold medal match with a gutsy performance against Kirsty Gilmour of Scotland. In an extensive 71 minute encounter, Nehwal won 21-14, 18-21, 21-17. Saina will now take on the winner of PV Sindhu and Michelle Li in the final.

India’s Dipika Pallikal and Saurav Ghosal had to settle for silver after losing in the mixed doubles final to Australia’s Donna Urquhart and Cameron Pilley, at the 2018 Commonwealth Games in Gold Coast. Pallikal and Ghosal suffered a straight games defeat as they went down 8-11, 10-11‌ in the title clash.