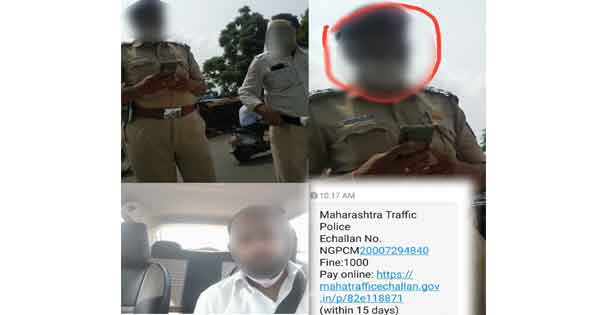 Nagpur: The citizens have been landing in trouble over the last few weeks for not wearing a mask while they drive their cars, with Rs 200 being imposed as fines on violators. Police have been giving out challans for violating the mask rule even when the driver is alone in the car. This has drawn some criticism from Nagpurians, who are taking it on social media platforms and tagging Maharashtra Home Minister, Anil Deshmukh and Nagpur Police Twitter handles. The cops on the other hand backs the action, clarifying that it’s under guidelines issued by the Maharashtra State Government.

According to COVID-19 guidelines issued by various state governments, not wearing a mask while driving one’s personal car attracts a fine of Rs 200. As police issuing tickets for violating the mask rule even when the driver is ‘alone’ in the car has received criticism, speaking to Nagpur Today, Deputy Commissioner of Police (Traffic), Vikram Sali elaborated on this matter.

“Even if a person driving a car alone has many possibilities of exposure with the surroundings. By any means, he or she has the air conditioner on in the vehicle, it can be exposed to the air outside, the moment a door is opened or a window is rolled down, it could prove severe. Car owners are under the impression that they are safe inside their vehicles, but that is wrong, unless and until you follow the norms” asserted DCP Traffic.

Sali further added that, “A violator is first asked about the reason behind not wearing a mask. If they have a genuine reason, the cops are either providing them with surgical masks or asking them to get one. If the reason is found to be flimsy, they are being detained and booked for violating a government order.”