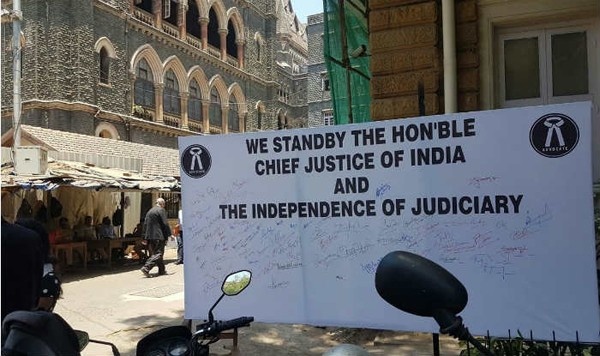 Mumbai: A group of lawyers have started a signature campaign outside the Bombay High Court on Wednesday, expressing their support for the Chief Justice of India, Dipak Misra, reports a news agency. The lawyers have placed a whiteboard in the premises that reads “We Stand By The Hon’ble CJI Of India And The Independence of Judiciary” and has gathered scores of signatures already. The lawyers’ move comes in response to the Congress-led Opposition decision last week to move the Supreme Court following Rajya Sabha chairman’s rejection of their impeachment notice against Misra.

MPs of as many as seven Opposition parties had moved an impeachment notice against Misra on five grounds of “misbehaviour”. Upset that it was rejected by Rajya Sabha Chairman Venkaiah Naidu for lacking merit, senior Congress leader Kabil Sibal said, “We’ll certainly file a petition (in the Supreme Court) against this and would want the CJI to not take any decision with respect to it; be it the listing or anything else; we’ll accept whatever the SC decides.”

The Congress also went on to allege that Naidu’s decision was hasty, an allegation the latter was quick to refute. On Tuesday, Naidu said the decision was well thought out, timely and was taken after over a month of “due diligence”. Finance Minister Arun Jaitley also came out in his support on the same day, saying that lawyer MPs were dragging their internal court matters to the Parliament.

Meanwhile, some media reports also suggested that two SC judges wrote to the CJI, seeking a “full court” to discuss “institutional issues” and the “future” of the judiciary but Misra was yet to respond.