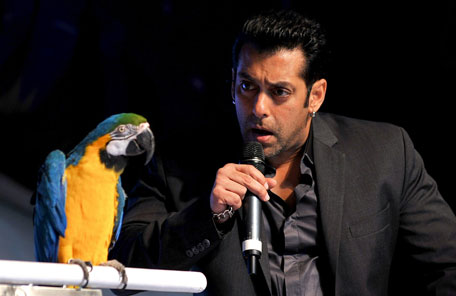 The much talked about reality show, Colors Bigg Boss is all set to bring to the audience its next season but with a twist. The superstar Salman Khan will host the forthcoming season of the reality show.

Unlike the last season, the Bigg Boss house will be back to its original location, Lonavala. However the house this time is being constructed with the addition of a new element. According to our sources, there will be two parts to this huge homestead, one will be a modern looking chic house with separate living areas for the boys and girls.

The second part of this house will be a rustic village with the typical ghass, jhopdi to add to the feel. The contestant who is punished during their stay in the house will be sent to the village devoid of all amenities just like the jail that was created in the previous season.

What we also hear is that the season will go on air on the 3rd October.

Keep an eye on this space to find out more gossip about the house and its inmates.

Ear stud in place, salt and pepper French beard matching a blue-grey suit, a snazzy Salman Khan launched the first promo of the sixth season of popular television reality show Bigg Boss.Preparations have begun for the new season of ‘Bigg Boss’ and this year apart from the selected contestants of the channel, there will be one common man on the reality show.

Salman’s line “Celebrity banne ki ab aap ki hai bari. To come inside the Bigg Boss mansion, pay attention,” seems to have caught on with the public.
Bigg Boss 6 has shifted to its original location Lonavala. Sabu Cyril, a famous art designer, will design the set of the show for this season.

Salman is once again returning to host Season 6 of Bigg Boss all alone. Salman will entry in house in “Dabang” Style. As the show became a huge success due to Salman’s association with the show the channel wants the actor to once again return as host.

The celebrities and contestants who would participate in the celebrity reality show have not been declared yet. Talks are going on to finalize the contestants. Foreign celebrities too will be associated to the show to make a good increase in the TRP of the show.

It has lately been reported that for the new more entertaining avatar of Bigg Boss, the show’s makers are going to open the doors for the common man, giving him a chance to participate in the show’s coming extravaganza Bigg Boss Season 6.

By now, these reports may have already fired up the hopes and dreams of audiences and raised people’s expectations of a possibility for being on India’s biggest reality show this season.
The upcoming season of Bigg Boss 6 is one of the most awaited one; courtesy the promise made by host Salman Khan that this time it will be presented sans sleaze. It is set to hit the tube from October 7 on Colors and will air at 9 pm on the channel.

It is known to everyone that the names of the contestants, who are supposed to be inside the house this time around, are kept a closely guarded secret. However the sources have time and again reported about those who have been approached for the show.

Earlier week, it was said that the Bhojpuri actor Nirahua aka Dinesh Lal Yadav was approached to participate in the show, though the confirmation is yet to come. And most recently a well-placed Khabri spills out the latest name to have been approached by the production house.

Aashka Goradia, aka Kalavati tai of Colors’ Laagi Tujhse Lagan might enter the Bigg Boss house this season. Buzz says that evenAman Verma has been approached. The host of the show, Salman, has promised that the content this season will be cleaner and suitable for family-viewing.

Hope the daily soap actress will ensure that Salman’s promise of airing clean content isn’t broken!
Like every year too…many names of probable contestants have been tossed in the air. But. we has got hold of a list which, if sources are to be believed, depicts the names of the final contestants who will be seen as inmates in Bigg Boss’ upcoming season.

So, these are the names which one can expect to see in Bigg Boss. However, clarity on the names can be achieved only on 7 October.
Handsome hunk of Bollywood, Salman Khan will continue to entertain his fans as a host.