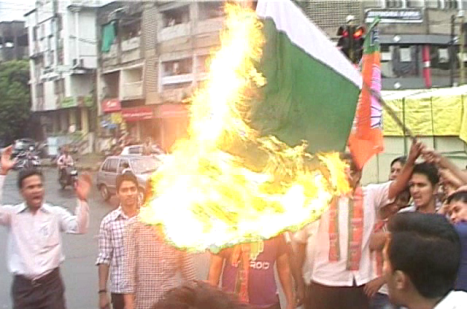 A volcano of anger erupted in Nagpur over the killing of five Indian soldiers by Pakistani Army. The outrageous incident echoed in Nagpur when the Bajrang Dal and Bharatiya Janata Yuva Morcha activists went ballistic and burnt a Pakistani flag as a strong protest at Variety Square and at Telephone Exchange Square. Both the Bajrang Dal and BJYM activists raised anti-Pakistan slogans in pitched voice which appropriately reflected the volcanic anger of the Saffron Men.

The brutal killing Indian soldiers is second of its kind in recent days. A few months ago, two soldiers were killed by “Pakistani Army.” Not only they were killed but the head of a soldier was cutoff from the body and was carried by the killers with them showing the most unhuman face of the Pakistani Army. 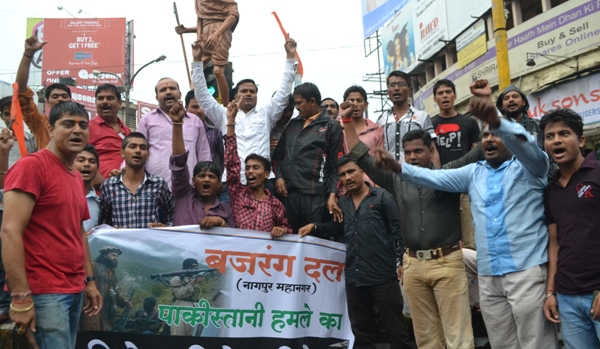 Talking to Nagpur Today, Bhayyaji Chaube of Vishwa Hindu Parishad, said, “The Indian Government must take tit for tat or eye for eye action against Pakistan. Pakistan doesn’t understand the language of warnings and threats. India should pay the Pakistan with the same coin for their unhuman actions. India talks peace. Pakistan talks killing. If the rulers in Delhi fail to to take “Muhtod” action, then the entire country will be on the streets to force the Government act tough against the habitual killers.”

Bhayyaji Chaube further said, the future course of action would be decided by the office-bearers of the VHP by calling a meeting today or tomorrow.

The BJYM leaders said, “India always forwarded a hand of friendship to Pakistan for peace and harmony. But the neighbouring nation is not at all respecting the India’s efforts for peace. On the contrary, Pakistan is carrying out dozens of terrorist attacks on our land killing hundreds and hundreds innocent citizens. Now, enough is enough. Pakistan carrying out bomb blasts, indulging in firing, killing soldiers. India must give a fitting reply to Pakistan instead of talking peace and harmony,” the angry BJYM leaders said.

The anger of the Bajrang Dal and BJYM activists has been just an iceberg. The peace-loving citizens of Nagpur hitting the streets would not be surprising if a call is given by any nationalist organization. 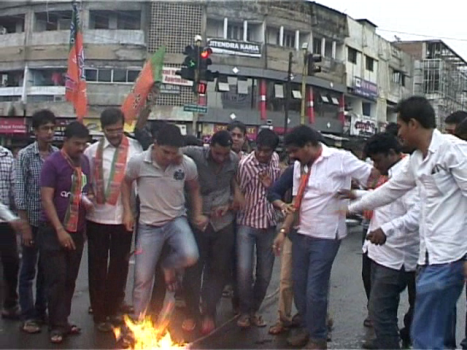