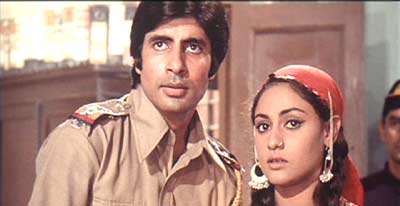 Megastar Amitabh Bachchan, who rose to fame after starring in Prakash Mehra’s Zanjeer, says he is grateful to writer-duo Salim Khan and Javed Akhtar for believing on him.
Amitabh Bachchan, 70, had delivered many flops before starring in the hit 1973 film and successfully earned the tag of ‘Angry Young Man’.
“40 years anniversary of film Zanjeer today .. An entire lifetime gone by.. What a moment.. Salim-Javed for thinking of me, thank you… Have always wondered how they did.. A failed newcomer.. So much connected to the film.. What a time in the life of a life!!,” he posted on Twitter.

The film, which had changed the trend from romantic films to action films in that era, translated the story of a common man to fight against the wrong and maintaining moral values at the same time.
Having released on May 11, 1973, the film also starred Jaya Bachchan, Pran, Ajit and Bindu in pivotal roles.