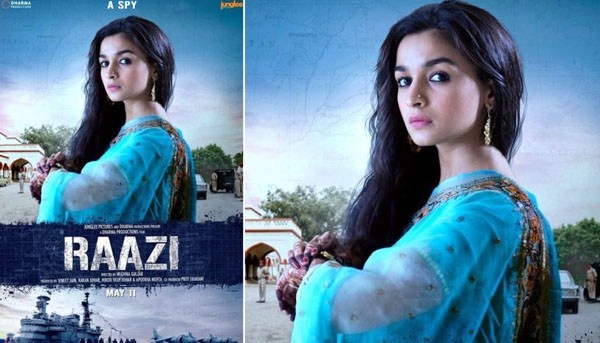 The countdown to Raazi has begun! Only one to day to go for one of Alia Bhatt’s most awaited films. Our excitement is at its peak as we count the hours to the much anticipated trailer. Alia Bhatt is not making it any easier. After releasing a teaser that had us intrigued, she has now released a brand new poster which is making our wait very difficult. After showing us a secretive side to her, Alia Bhatt is now revealing another side to Sehmat – The side of a daughter.

The new poster captures the delicate bond between a father and daughter beautifully. It is intense yet subtle. It speaks volumes of the relationship this father-daughter duo share. Also, we can’t help but confess that Alia is looking stunning even in a side glance. We are also shown a glimpse of the other sides to Raazi as a wife and a spy. Each of them bring out a stunning side in the actress. Also Read: Alia Bhatt starts the countdown for the Raazi trailer with this new clip.

Raazi will be Alia Bhatt’s first release of 2018. Fans are looking forward to this movie that promises to be yet another piece of unconventional cinema directed by Meghna Gulzar. She will star opposite Vicky Kaushal for the first time. Raazi is based on a Harinder Sikka’s novel – Calling Sehmat. The movie is set in the 1971 Indo-Pak War. The film will revolve around a Kashmiri spy married to a Pakistani officer. The film is produced by Karan Johar.