As the membership drive for newly emerged ‘corruption crusader’ political outfit Aam Aadmi Party (AAP)  picked up in Nagpur, the senior party men here are much focused upon bringing on board the members with clean image and no criminal background. The party’s efforts appear to be bearing fruits as more and more people from educated and non-corrupt class have stepped forward to strengthen the party. However, there is an undertone activity from the party that has created dent in its political sanctity and integrity as the party of non-tainted members. The most glaring example of this fact surfaced when the Aam Aadmi Party’s local body in Nagpur issued media invite for the party’s press conference organized on Wednesday at its office in Dhantoli here. The media invite on the party’s official letter head included the name of Nivedita Pendharkar who recently has the criminal case registered against her. The case is still subjudice.

Pendharkar is the director at Shells Advertising, an agency owned by Sanjay Arora who recently came under the clouds after a recent police raid at his office in connection with the software piracy and also seizure of objectionable CDs. During the raid police detected the software theft and also other objectionable material in digital format. The case has been registered against Pendharkar and Arora in this connection.

When Nagpur Today quizzed AAP’s District Executive Member and party’s official spokesperson Prajakta Atul in this regard, she clarified that she did not know whether Pendharkar is AAP’s member or not, but the invite has been sent through Shells Advertising which may have committed the glitch. “Actually we cannot scrutinize every member for having police record or not but if someone complains of this, we certainly gets into the matter.”

Surprisingly, the party’s letter head bears the name of Nivedita Pendharkar and the spokesperson has no idea whether she is the member of AAP or not.

“We will take care to avoid such a glitch and try that such incidents do not occur in future”, Prajakta told Nagpur Today.

Rajesh Pugalia, another prominent AAP leader here said, “We only got Arora (owner of Shells Advertising) to send the media invite across various publications but little did we know that the tainted director will send the invite in her name. I will see that such things never recur anytime in future.”

Pugalia added, “Even we were not aware of any criminal case pending against Pendharkar who circulated the media invites for the press conference. Actually the invite should go under the name of the party’s official media team and not by any other person.”

As the word is going strong in favour of Aam Aadmi Party, it certainly has the brighter prospects in upcoming general elections. But at this moment AAP has to measure every word they speak and mind every step they take, be it on national or local level. Committing such a major glitch only proves the party’s blatant ignorance towards handling things related to media which is going to be vital as far as propagating party’s poll strategy is concerned. With the people frustrated from national parties and having rested hopes on AAP, it becomes dual responsibility of the party to be very careful in membership drive and also keep a check on people with tarnished public image. Even there should not be any professional connection with such organization or agency, especially when the party is looking for the positive change. 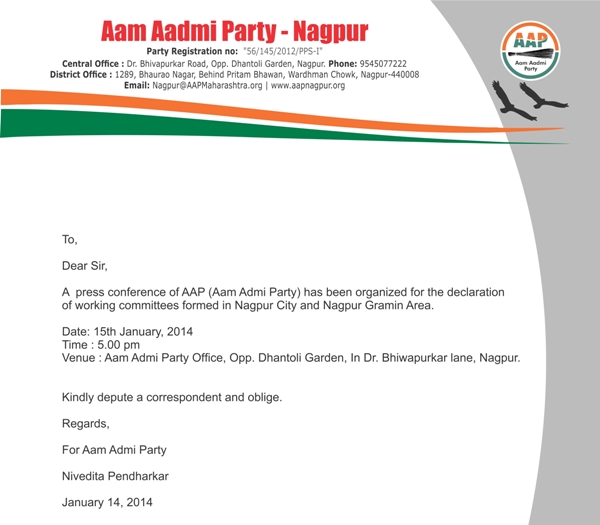