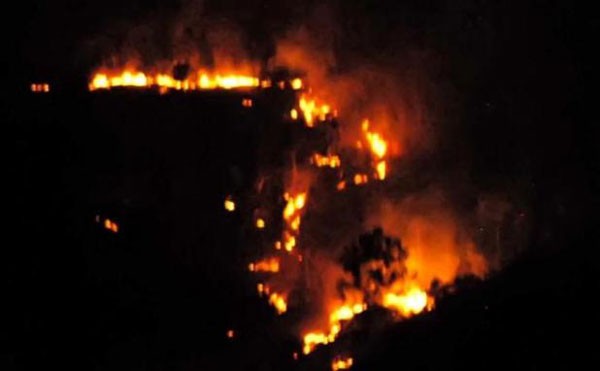 Nine people, who were part of a trekking expedition, have been killed in a forest fire in the Western Ghats, the Tamil Nadu government said today.

“Nine persons are dead, while 17 of the rescued have been hospitalised and 10 did not require hospitalisation,” Commissioner of Revenue Administration K Sathyagopal told reporters. Among the dead, six were from Chennai and three from Erode, local police said.

Meanwhile, Chief Minister K Palaniswami is rushing to Theni to oversee rescue operations. A 36-member team — 24 people from Chennai and 12 from Tiruppur and Erode districts — on a trekking expedition reached Kurangani hills on March 10.

The team included 25 women and three children, according to Theni District Collector Mariam Pallavi Baldev. Four helicopters of the IAF and their 10 commandos are involved in the rescue operation, according to a tweet by Defence Minister Nirmala Sitharaman. Health Secretary J Radhakrishnan said rescue teams comprising officials and health department personnel were camping in the hills.

Besides the IAF which has deployed four choppers from its Sulur Air base in Coimbatore, personnel drawn from fire and rescue and forest departments, police, and local officials are involved in the rescue operations assisted by local tribals and employees of nearby tea estates.

According to Pallavi Baldev, the trekkers after staying overnight at an estate in Kozhukumalai started their return journey to the plains yesterday morning when they heard about the sudden forest fire and got separated while attempting to find a safe way.

Kurangani-Kozhukumalai hills in the Western Ghats are located near Bodinayakanur, about 40 kms from here. State health minister C Vijayabhaskar said the injured trekkers were received at Kurangani by a medical team. — PTI